(1) South Korean government enforced Act on Protection of Non-regular employee
Increase in the number of non-regular employee began with IMF economic crisis. As terms of financing by IMF, the government had to be commited to structural reform of company, money and banking, public sector and labor market. Especially introduction of dismissal of the purposes of reorganization system and legislation of “Act on Prohibition against employee dispatch” are required for labor market.

However, there was a limitation in fulfilling IMF’s request amid growing social fear such as business bankruptcy and unemployment. Although labor law including legislation of dismissal for the purposes of reorganization system revised in 1997, the timing of enforcement was postponed for two years later because of opposition by labor side.

To get agreement of workers, government, employers, South Korean government set up “the Tripartite Commission” which involves labor union, representative of business managers and government delegate in 1998 and issued “Social agreement for economic crisis breaching”. Although it suggested 90 items for early enforcement of dismissal for the purposes of reorganization system and legalization of dispatched work, and 21 agendas for second consultation, it just ended without any agreement.

It was about 2004 that South Korean government undertook to establish Act on Protection of Non-regular employee. However, labor side strongly opposed to it because the Act would only increase dispatched employee and would not resolve the issue of discrimination. As a result, two years had passed since the bill had been submitted to the Diet, and the ruling and opposite parties finally came to an agreement in 2006 which is the fourth year of No Mu-Hyeon administration. In this way, Act on Protection of Non-regular employee passed the Diet’s full House in November 30th in 2006 and was enforced in July 2007.

The period which makes direct employee mandatory was shorten from three years to two years after the agreement. As the scope of the Act in the early stages, only a workplace and public institution which usually hires more than 300 employees. The scope was extended generally, and it included company which usually hires between 100 and 300 employees in 1th July 2008, and finally it does all company and a workplace with more than 5 employees in 1th June 2009.
(2) Changes after enforcement of Act on Protection of Non-regular employee
Then, how the enforcement of Act Protection of Non-regular employee changed the situation? Initially, the rate of non-regular employee which was 37.0% in August 2004, decreased to 35.8% immediately after the enforcement in August 2007. However, we can’t say for sure that the establishment definitely reduced the rate because the trend of the number of non-regular employee had tended to decease since August 2004. The rate of non-regular employee continually had been decreasing since August 2007 as well and it reached 31.9% which is the lowest since the survey had begun seriously in 2004. After all, it increased to 32.9% in August 2017 which is higher standard for the first time since August 2012 of 33.2% (Figure 4). 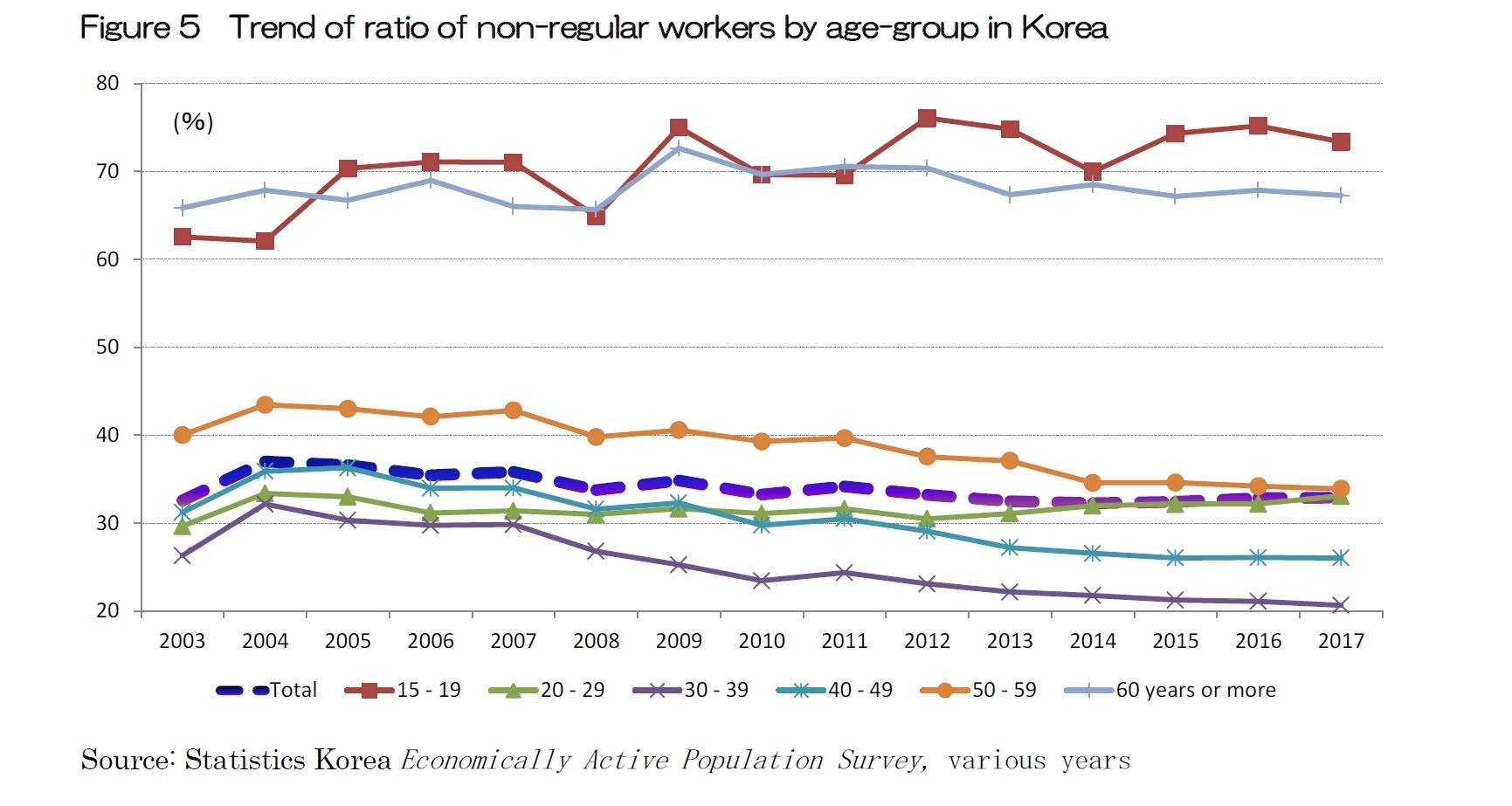 Then, did the enforcement of Act on Protection of Non-regular employee affect the rate of non-regular employee? Table 3 and 4 show the test result of mean difference by sex and age groups. Firstly, variance of two population by sex is equal according to Levine's test for equality of variance. After testing the gap of average based on the result, the rate differs in male and the amount of male and female between before and after the enforcement, Therefore, it is considered statistically significant.

Meanwhile, the rate differs by ages among 30-39 years old, 40-49 years old and 15-19 years old, and it is also considered statistically meaningful as well ( the result which doesn’t hypothesis variance because there was no homoscedasticity according to Levine's test for equality of variance).

Figure 6 illustrates trend of length of service based on the employment pattern and we can find out that regular employee`s length of service increased from 70 months in 2006 to 90 months in 2017. Those of non-regular employee, also rose from 24 months to 30 months as well in the same period. Then, why did it increased though non-regular employee came to be regarded as pen-ended contracted employee after they work more than two years by the Act on the Protection of Non-Regular Workers? It is thought to be due to exemptions of the Act on the Protection of Non-Regular Workers. In other words, although the company can hire the temporary workers within the scope which doesn’t exceed two years in accordance with the provisions of Article 4, the company can hire them over two years only in the following cases.

・Where completion of a job or a time period necessary for completing a job has been established.
・Where a position becomes vacant due to absence or reassignment and someone must perform those job duties in the absent worker’s place until the absent worker returns in the corresponding year.
・Where a worker must complete worker study or training and the time period necessary to complete it has been established.
・Where an employment contract has been executed with a senior citizen as defined in Section 2.1 of the “Senior Citizen Employment Promotion Act.”
・Where utilization of specialized knowledge and skills is required as established in a presidential executive order in connection with a job sponsored by a government welfare or unemployment measure.
・For any other reasonable reason as established by presidential executive order. 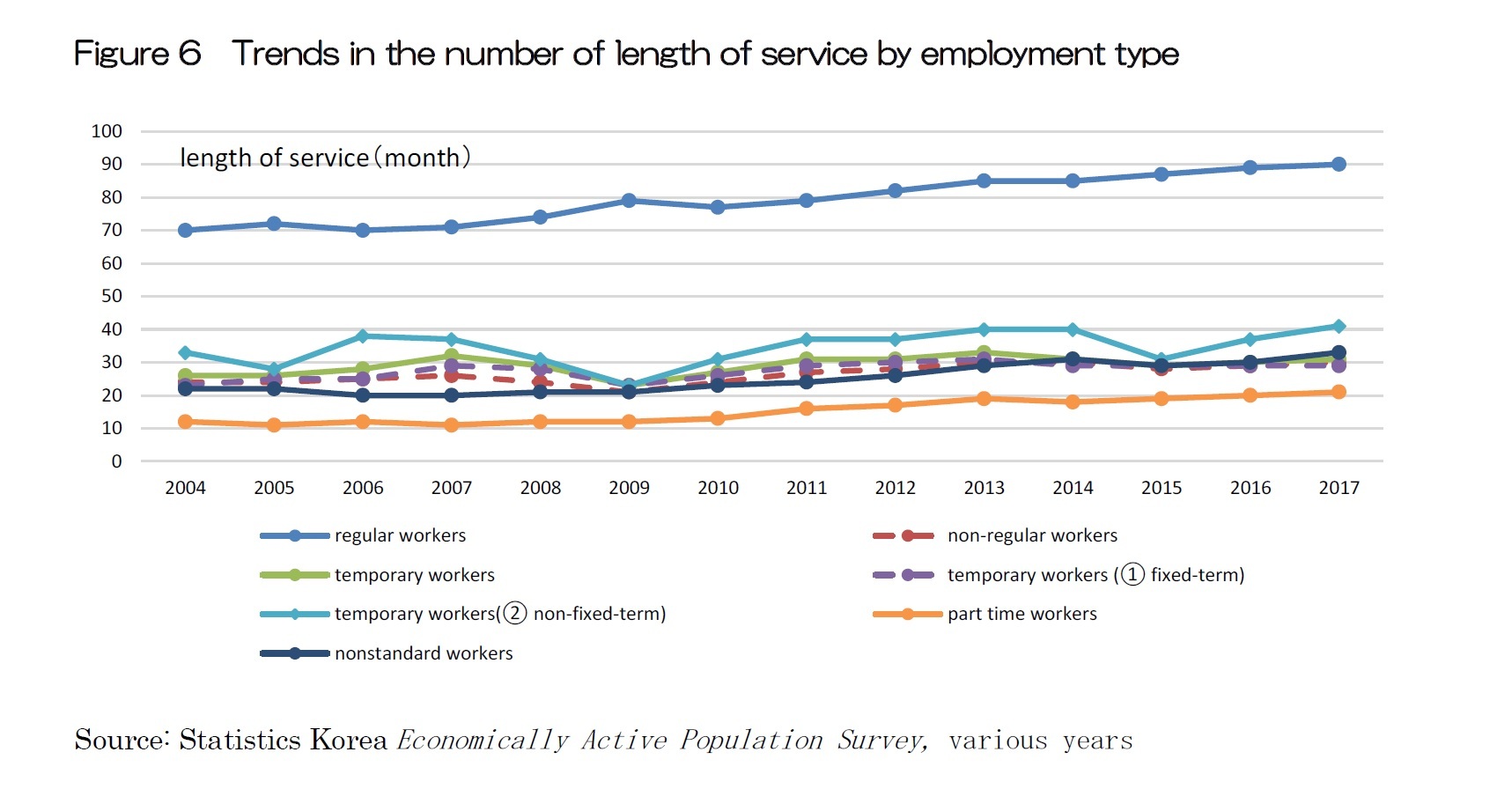 (3) Primary Results of Labor Mobility Panel Surveys by Mode of Employment (1 – 8)
In 2013, the South Korean Ministry of Labor announced the results of the Labor Mobility Panel Survey by Mode of Employment (1 – 8) in order to evaluate the effectiveness of the Act on the Protection of Non-Regular Workers, implemented on July 1, 2007. This survey polled a sample of 20,000 fixed-term workers, conducting its first survey in April 2010 and its eighth and final survey in April of 2012, observing changes in labor mobility, labor conditions and worker satisfaction during a period of two years.