Recently, phrases like “gig economy” and “crowd worker” are commonly used in mass media. “Crowd work” refers to work—often one-off projects—that is assigned and submitted through a platform on the Internet. The name of this way of working and the name of the workers performing these jobs have not yet been integrated. As such, there are many terms referring to crowd work and crowd workers, including crowd sourcing, sharing economy, human crowd, digital work, gig economy, and freelance. In most industries, wages, paid vacation, public social insurance benefits, and fringe benefits are provided to employees as a compensation for working set hours. Crowd workers, who do not have continuous projects and set hours, however, do not receive these benefits. Thus, their income is likely to be unsteady, and therefore, this way of working is unstable.

The current situation of crowd workers in the U.S. and Europe

Though the number of crowd workers in developed countries like the U.S., France, the U.K. and Germany has been increasing, there is limited official data available on their numbers. We must therefore rely on the results of surveys conducted by private companies, NPO, and researchers to analyze trends in the crowd work industry.

Additionally, it is difficult to compare the data because the available data differs depending on the country. According to the survey “Freelancing in America: 2016”, conducted by Upwork , formerly Elance-oDesk,which is a global freelancing platform Union, the number of freelancers in the U.S. was 55 million in 2016. This reflects an increase of 2 million from 2014, and means that freelancers account for 35% of the entire U.S. workforce. The survey also forecasts that freelance will be responsible for about 50% of the whole workforce by 2020.

No longer just a label for journalists and photographers, the term “freelancer” is now understood to apply to a wide variety of careers, including bloggers, designers, Youtubers, and IT engineers. A main difference between the present day’s freelancers and those of the past is that most of the workers seek their work through Internet platforms. Therefore, it can be said that an increase in freelancers leads to growth in the number of crowd workers.
While a lack of data also makes it difficult to evaluate the crowd work industry in Europe, an Internet survey conducted by Ursula Huws and Simon Joyce at the University of Hertfordshire in February 2016 provides some insights into crowd work in the U.K., Germany, and Sweden. The survey shows that 11% of respondents in the U.K., 12% in Sweden, and 14% in Germany regard them as crowd workers. Respondents, who are 34 or younger, identify as crowd workers at a higher rate (Figure 1). 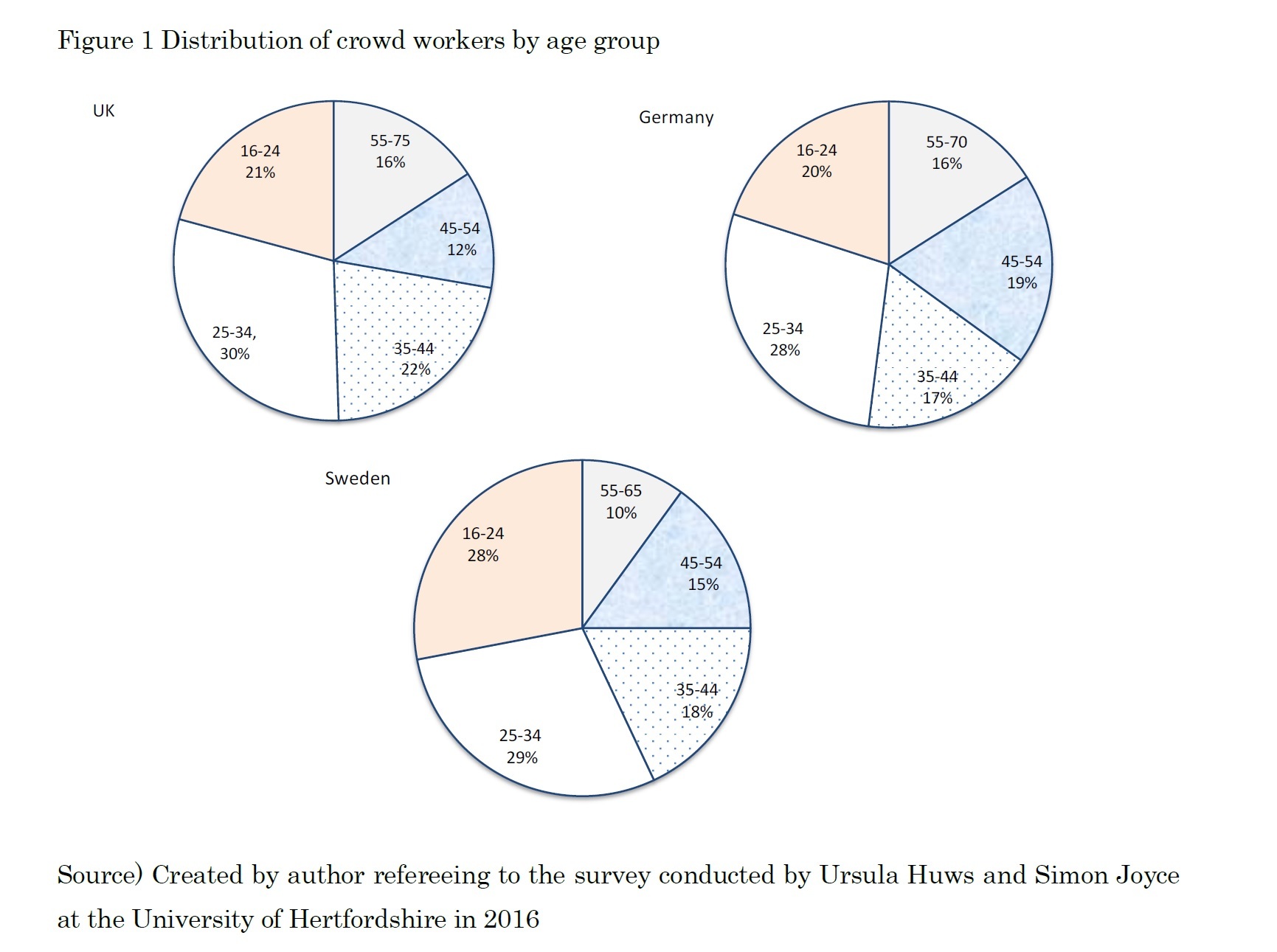 While the number of crowd workers is increasing, their income level remains low. For instance, 42% of U.K. respondents, who identified themselves as crowd workers, reported annual earnings of less than £20,000, which is well below the average annual salary of £27,271 for employees in the UK. Moreover, in Germany, more than 80% of crowd workers reported an income level below €36,000. Given that the average annual salary in Germany is €47,748, it can be said that many crowd workers take on low-paid and unsteady work. Further, their actual income is more likely to be lower as they must pay all expenses for their work out-of-pocket.

The current situation of crowd workers in Japan

Then how is the situation in Japan? Here's a limited edition of the paper, so I want to point out the current situation of freelance and crowd sourcing. First, according to “Survey on actual condition of freelance 2017,” there are 11,220,000 freelances in Japan, accounting for 17% of the whole workforce as of 2017—an increase of 5% compared to the survey conducted a year before. Types of freelance in Japan are classified into the following four categories:

There has been an especially large increase in the number of side job-type freelance—4.58 million in 2017, up from 4.16 million in 2016. The Japanese government is laying out a policy to support a full-time worker`s secondary job as part of the work-style reforms. Thus, the number of side job-type freelancers is expected to rise more and more. However, in Japan, many of the freelances are currently participating in the labor market with unstable earnings.

For example, the average annual income of "Self-employed-type freelance" with the highest income among freelances is 3.5 million yen, which is lower than employee's average salary of 4.2 million yen. Most of the freelances enter the labor market with unstable earnings, 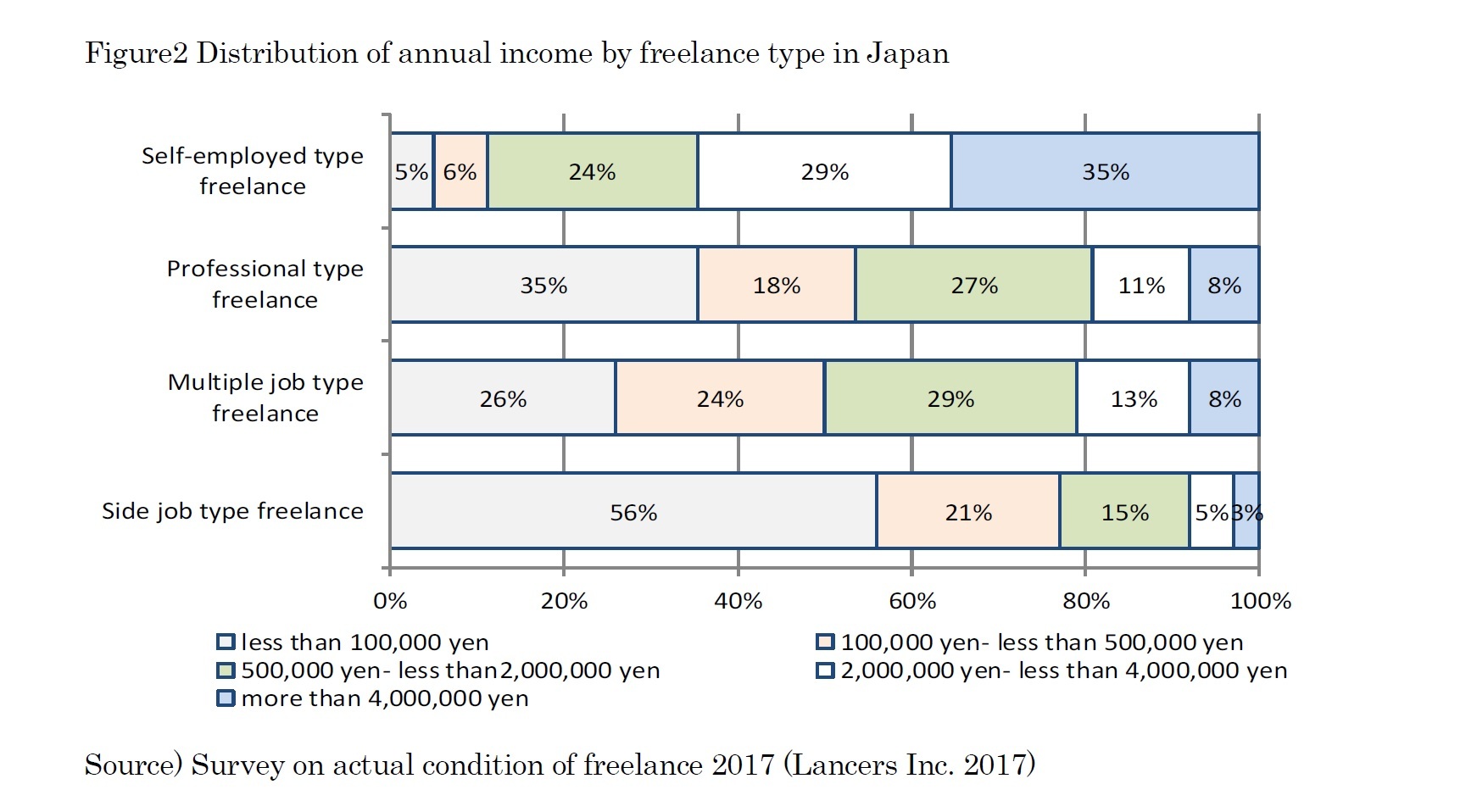 At the moment, the number of registered businesses operator who provide crowd sourcing in Japan has reached hundreds of thousands. According to the “2014 White Paper on Small and Medium Enterprises in Japan” by the Small and Medium Enterprises Agency, the rate of corporations with less than five full-time employees that have ordered crowd sourcing sites to work has risen by about 70%. The contents of the work of the crowd worker using a crowd  sourcing is including simple tasks like data entry, but also more complicated jobs like development assistance for AI. Therefore, the use of crowd sourcing in Japan is expected to increase in the future. 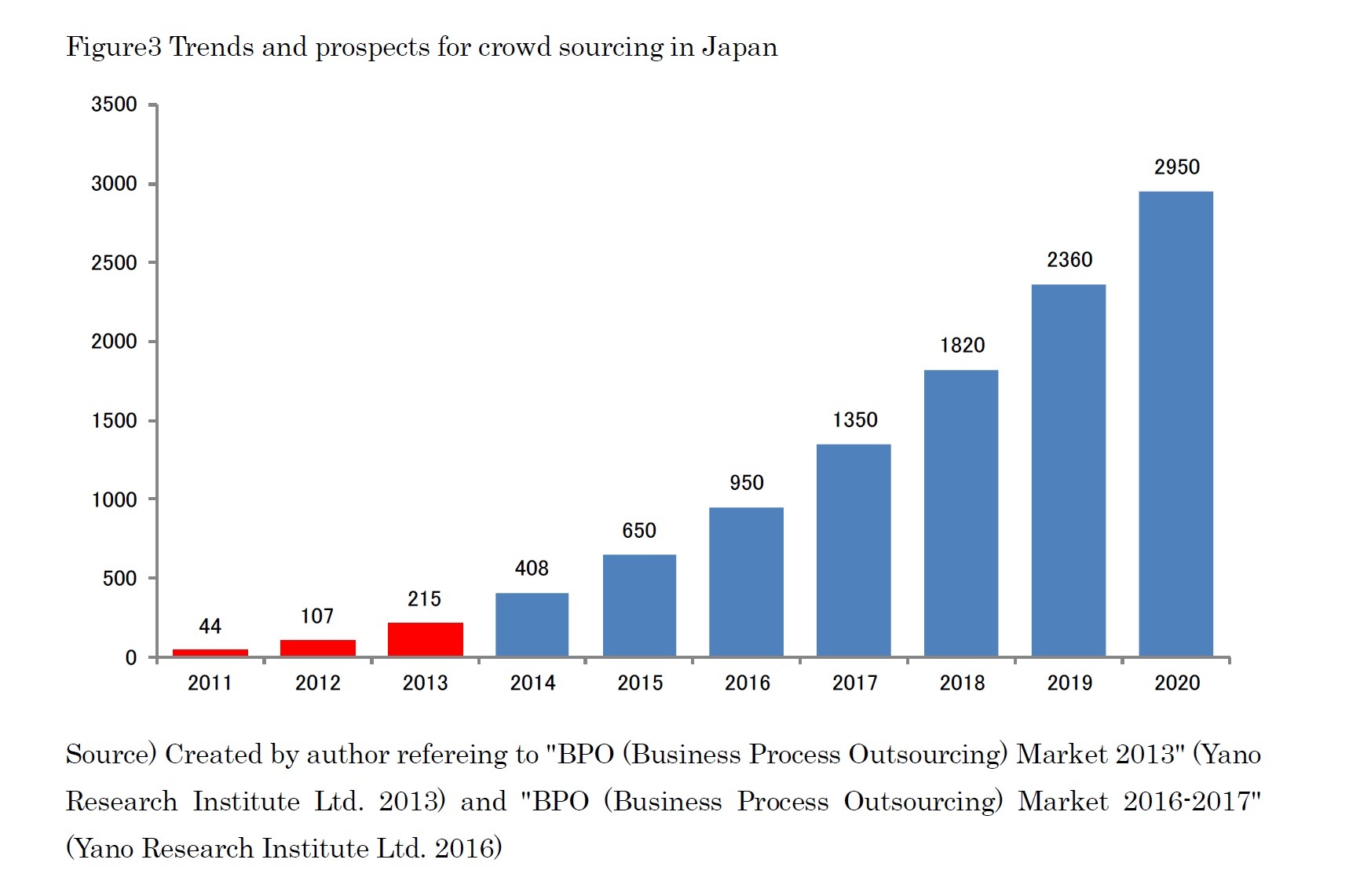 Mechanisms to protect crowd workers have not been established because the use of crowd sourcing is such a recent phenomenon. The implementation of regulations on crowd sourcing is often highly problematic because the online platforms are often used by employers and employees in multiple countries.

Most crowd workers are placed in an economically bad situation. However, discussions about crowd workers’ social and economic status are becoming more common, and the movement to improve their working standards is expanding slowly in the U.S. and Europe. In Japan, while specific measures for improving conditions for crowd workers have not been implemented, it is expected that non-regular employees’ working standards will be improved because of the promotion of equal pay for equal jobs in the near future.

Maintaining the current situation, in which Labor Standards laws have not yet been implemented, could lead to an increase in the working poor more and widen pay gap issues. To prevent this, the government should take the lead in improving the current situation of crowd workers. The government should implement measures to improve working condition standards, not only for non-regular employees but also for crowd workers at the same time. Expanding and applying the exception for homeworkers, which is currently implemented, could be one step. To conclude, the researchers and policy-makers should kick off the measures for crowd workers by referring to the example in the U.S and Europe at the earliest.