On January 1, 2008, South Korean government introduced an Earned Income Tax Credit (EITC) to boost work incentives of the working poor through supporting income of the tax system and achieving fairness and efficiency of the social system management by establishing new infrastructure. Simply put, the EITC is a subsidy to support the work for low earners. This is not familiar to the people in Japan, but the system is known to economists. In 1975, the system was introduced to the United States, and currently the system has been adopted in many countries, such as the United Kingdom, Canada, France, Sweden, Netherland, South Korea, and so on; it has passed more than a quarter of a century since the introduction to the United States.

As Japan does not have a similar system, it might be difficult to fully understand the EITC. To explain more specifically, it is an income support for the work system done by supporting one’s real income. Kamakura (2010) explains the EITC as follows. “The EITC is, literally, an integrated system of social security benefits and tax credit. To be specific, income taxpayers are offered tax credit, and those who cannot be exempted or are below the minimum taxable ceiling are provided cash benefits. Source of the idea originates from Freedman’s negative income tax."2

It aims to increase work incentives of the working poor who earn low income or suffer from economic difficulties by providing financial incentives which are calculated on the basis of their earned income. ‘Welfare’ is the conventional policy of public assistance, which supports income up to a certain level and is not related to whether the person is working or not; on the other hand, the EITC pursues ‘Workfare’, that provides assistance in order to increase total income as the working poor work. Therefore, the system can achieve anti-poverty and ease income disparity, and it aims to induce the participation to labor market from the dependence on welfare benefit, by providing financial assistance to the working poor.
2 Retrieved from Kamakura, Haruko(2010) “Overview of the EITC in Foreign Countries”, Survey and Information-ISSUE BREIF- No. 678

In this section, it is discussed that the poverty rate and the current situation of the working poor in South Korea by utilizing OECD data and precedent studies to explain the background of the implementation of the EITC.

The high economically active household ratio that consists of the all poor households in South Korea is attributable to relatively low population aging rate, low rate of participation to labor market of young generation based on employment mismatch, high ratio of non-regular workers with relatively low income level among employees, South Korean government’s insufficient countermeasures for social security for economically active households, and so on.

The main reason of poverty among economically active households in South Korea is precarious work. Dae-myung Noh (2009) estimates that about one-third of the unemployed and about a quarter of day laborers are in the poor class (Figure 2).

Young-mi Kim (2009) presents that as the size of an enterprise gets smaller, the years of employment become shorter and the ratio of low income workers gets higher. To be specific, 18.8% of male and 39.1% of female workers in companies of 1~4 workers are low wage employees4 while 0.7% of male and 4.0% of female workers receive low wage in companies with more than 1000 employees (Figure 3). 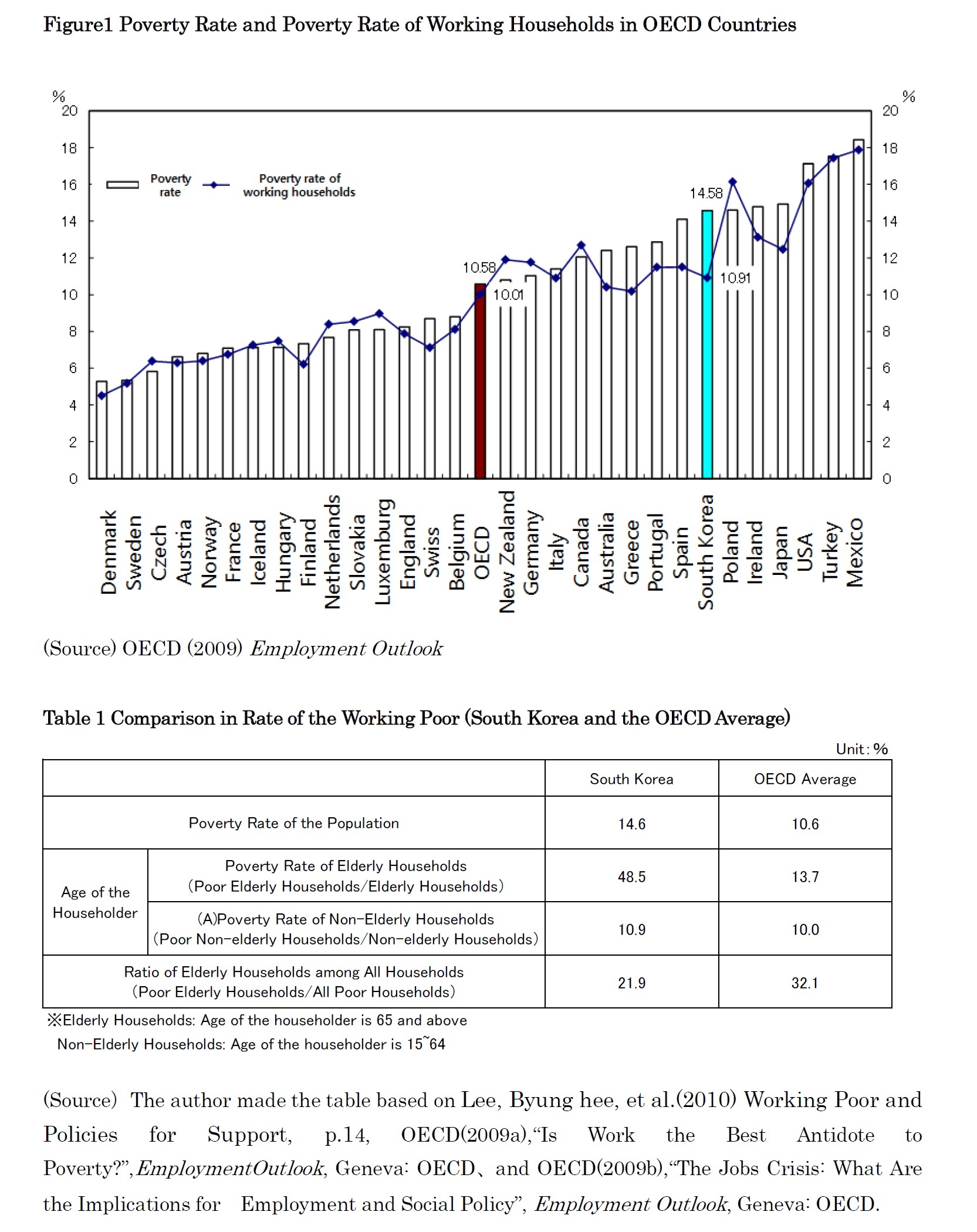 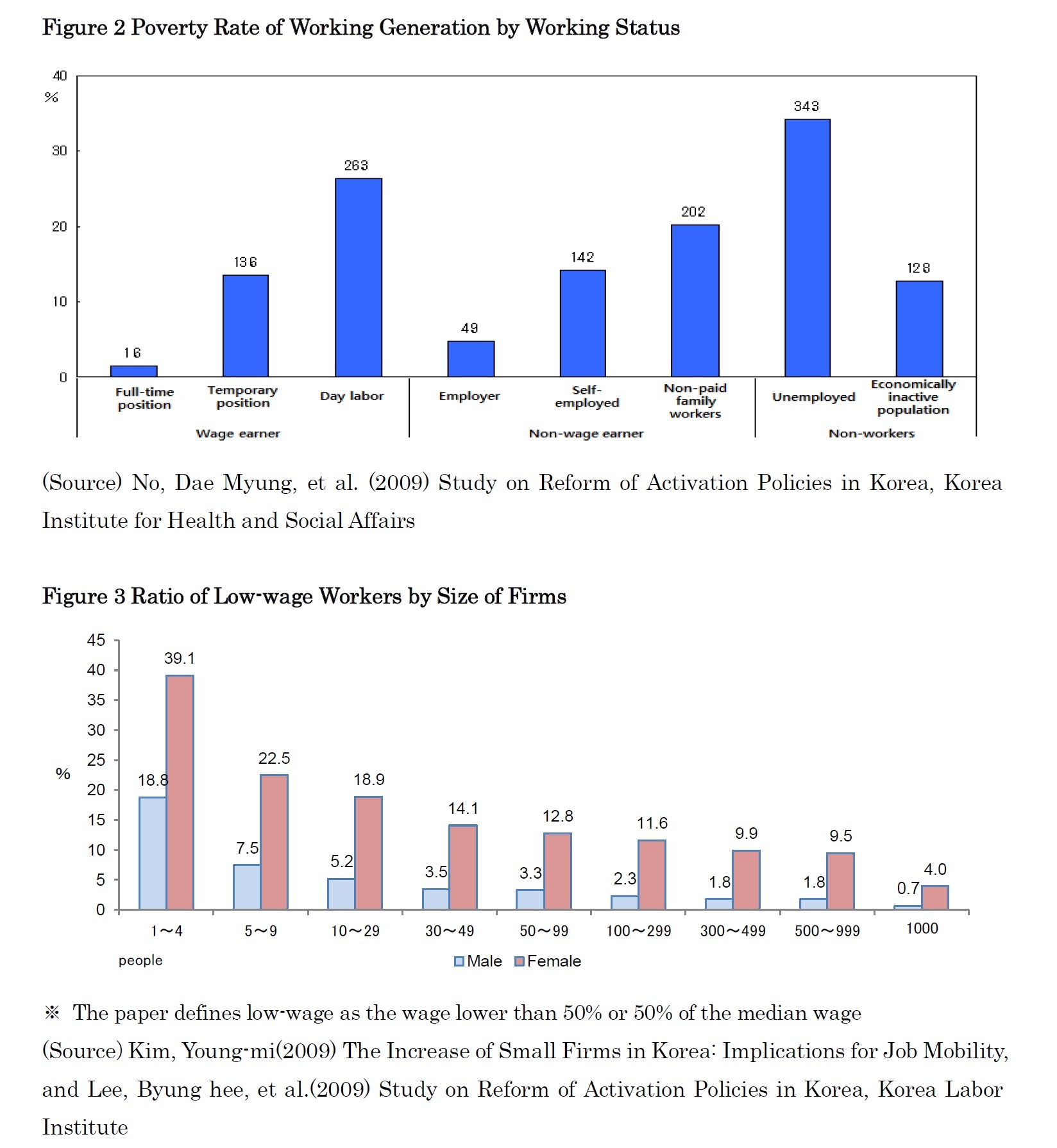 From the result, South Korean government introduced the EITC system to address the income gap and the increase of the working poor issues, which stems from globalization of economy in recent years, changes in industrial structure, and expansion of non-regular workers. Especially, ‘the secondary poor5’, which consist of the working poor, are put in difficult situations to escape from poverty as they easily become excluded from receiving public assistance like the National Basic Living Security System6 and public social insurance for health, unemployment and so on. By 2002, the secondary poor’s coverage rate of social insurance was 36.7% for the national pension, 27.7% for the employment insurance, 59.7% for the occupational health and safety insurance and 98.2% for the health insurance. If the health insurance is excluded, a considerable number of the secondary poor are ruled out from the public social security net7. To address the problem, South Korean government aims to raise working incentives by linking work and payment of the social insurance. South Korea introduces the EITC for the first time in Asia to shape the environment that promotes the working poor’s economic independence and anti-poverty, and to expand and reform the social security network.

That is, by implementing the EITC, South Korean social security network has changed from the two-level system which is composed of public social insurance and public assistance (the National Basic Living Security System) public to the three-level system, and income security system gets more cordial (Table 2).

3 According to definition of OECD, the ratio of the people’s equivalent disposable income (disposable income of households divided by square root of the number of households) does not reach half of the entire nation people’s median value.
4 The paper defines low-wage as the wage is lower than 50% of the median wage.
5 An income group that earns income is less than 120% of the minimum cost of living and is excluded from receiving benefits of the National Basic Livelihood Security System, a public assistance system of Korea.
6 It corresponds to Japanese Livelihood Assistance System.
7 Cho, Sun-joo, et al.(2008) “Earned Income Tax Credit and Female Labor Supply: Empirical Analysis and Policy Issues”, p.51, Korean Women’s Development Institute