In the January-March quarter of 2021, real GDP declined by 1.3% (down 5.1% per annum) for the first time in three quarters.Decreases in private consumption (down 1.4% from the previous quarter) and capital investment (down 1.4%) as a result of the reinstatement of the state of emergency; a sharp decrease in government consumption (down 1.8% from the previous quarter) due to a reduction in medical examinations at institutions affected by the spread of the novel coronavirus; and the suspension of "Go To Travel" limited the growth rate.

Exports rose 2.3% on the back of a recovery in global economic activity, but imports rose 4.0%, which exceeded the exports growth rate on the back of steady domestic demand for goods. As a result, the contribution of external demand fell 0.2% from the previous quarter, the first decline in three quarters.

After posting record-high negative growth in the April-June quarter of 2020, the Japanese economy recorded a double-digit annual growth rate for two consecutive quarters. However, in 2021, the January-March quarter recorded negative growth again following the reinstatement of a state of emergency, and movement toward economic normalization stalled. 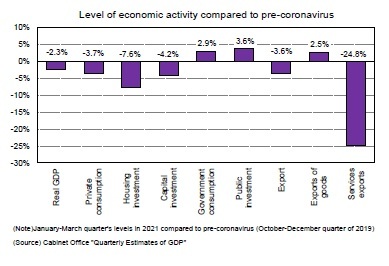 Although the drop in growth was small compared to April 2020, when a state of emergency was declared, the level of real GDP in the January-March quarter of 2021 was down 2.3% from pre-coronavirus (October-December quarter of 2019) levels. Government spending (government consumption, public investment) has been above pre-coronavirus levels, but private demand (private consumption, housing investment, and capital spending) has plummeted. In addition, although exports of goods have increased due to the recovery of overseas economies, exports of services have fallen significantly below pre-coronavirus levels, mainly due to the evaporation of inbound tourist demand.

The Japanese economy was depressed by the hike in consumption tax rate before the coronavirus pandemic hit. Compared to the most recent peak in the July-September quarter of 2019, the level of real GDP in the January-March quarter of 2021 was down 4.2%, and that in private consumption was down 6.7%.
(Impact of the third state of emergency)
The state of emergency declaration was lifted in March, but on April 25, a third declaration was issued, targeting the four prefectures of Tokyo, Osaka, Kyoto, and Hyogo. The scheduled end date of the state of emergency, which was initially set at May 11, has been extended to May 31, with Aichi, and Fukuoka Prefectures at May 12 and Hokkaido, Hiroshima, and Okayama Prefectures at May 16. The ratio of GDP in the regions subject to the state of emergency declaration to the total GDP in Japan increased from 32% on April 25 to 50% after May 16. 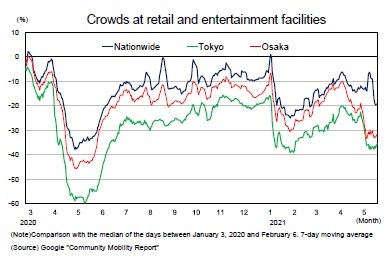 According to Google's "Community Mobility Report," crowds at retail and entertainment venues (restaurants, cafes, shopping centers, theme parks, movie theaters, etc.) plummeted following the state of emergency declared in January 2021, then picked up at the end of March, following a decline in coronavirus cases and the lifting of the declaration in some areas. However, since the beginning of April, due to the increase in the number of positive cases, priority measures such as disease prevention, and the state of emergency declaration, the population in areas subject to the declaration, such as Tokyo and Osaka, has sharply decreased again. Although the population outside the affected areas did not decrease much due to the effects of the coronavirus outbreak and fatigue from voluntary restrictions on activity, the pace of decline accelerated across the country after the Golden Week holiday in May, following the extension of the state of emergency declaration and the expansion of affected areas. 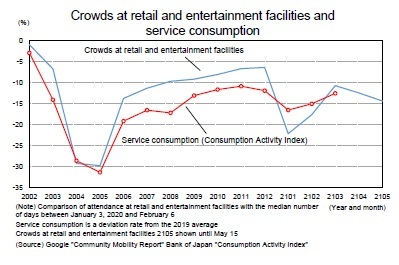 This state of emergency declaration is likely to have a greater negative impact on personal consumption than the previous declaration (in January 2021), as restrictions on economic activities, such as the closing of restaurants serving alcoholic beverages,  department stores (excluding food and other necessities), and theme parks and amusement parks, have become stricter. In terms of goods and services, although service consumption, which is closely linked to crowds, remains sluggish, it is likely that further decline will remain limited as the level of service consumption has already fallen significantly. Although the closure of large-scale commercial facilities is a negative factor in the consumption of goods, it will remain firm on the back of an expansion in stay-at-home demand.


2. Real GDP growth rate is expected to be …

In the April-June quarter of 2021, real GDP growth rate is expecteded to be 0.2% (0.9% per annum) due to the state of emergency declaration. Private consumption will fall 0.2% in the April-June quarter for the second straight quarter, with the January-March quarter of 2021 down 1.4% from the previous quarter. On the other hand, unlike the spring of 2020, demands other than private consumption are less susceptible to the state of emergency declaration, and capital investment and exports are expected to increase. Also likely to boost the growth rate is higher government consumption, which has seen an increase with the progress of vaccination.

In the July-September quarter of 2021, real GDP is expected to grow at a high rate of 5.2% on an annualized basis, subject to the lifting of the state of emergency. The main reason for the high growth is that private consumption will increase 1.8% from the previous quarter with the easing of restrictions on activity. However, we cannot deny the risk that consumption could be undermined by the intermittent issuance of priority measures to prevent the spread of the disease or another state of emergency declaration.

As for the future, it is expected that the number of positive coronavirus cases will decrease with vaccine distribution. However, it is unlikely that the number of positive cases will drop to zero, and the number may fluctuate depending on the prevalence of mutations and changes in temperature. If measures are taken to curb the spread of the disease, such as requests for leave of absence and refraining from going out, the economic slump will be prolonged. 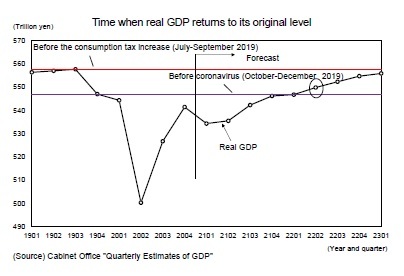 At this point, we expect real GDP to exceed pre-coronavirus ( October-December quarter of 2019) levels in the April-June quarter of 2022, and to return to its most recent pre-consumption tax rate peak (July-September quarter of 2019) in 2023. However, it is extremely difficult to anticipate future trends in the spread of COVID-19 and the corresponding public health measures. If the government continues to take the same policy measures as it has in the past, this will likely further delay the normalization of the economy.
(High levels of savings could boost future consumption)
The employment and income situation remain severe, but the worst is over. The active job openings-to-applicants ratio, which reflects labor market supply and demand, dropped from 1.64 in January 2019 to 1.04 in October 2020, and then rose to 1.10 in March 2021. The unemployment rate rose from 2.2% in December 2019 to 3.1% in October 2020, but improved to 2.6% in March 2021.

Although the number of employees has continued to decline compared with the previous year, it is clear that the number of employees in industries other than face-to-face services is picking up, and it is likely that the total number of employees will also increase after the beginning of FY 2021. Wages per capita are expected to decline in FY 2021 in special bonus, where deterioration in corporate profits is reflected belatedly, and a deceleration of scheduled wages due to the 2021 dull shunto negotiations is expected.However, non-scheduled wages, which saw a significant decrease in FY 2020, are expected to increase, reflecting a recovery in overtime hours as economic activities pick up. 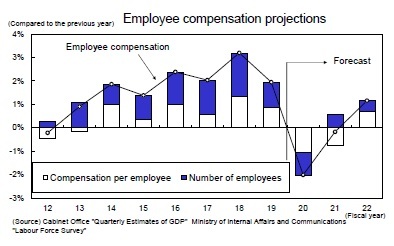 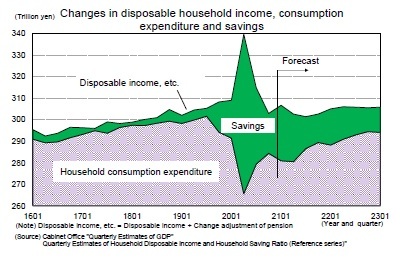 However, as consumption continues to fall far below normal levels due to restrictions on household activities, household savings are expected to remain at a high level despite low disposable income. For this reason, there is a possibility that consumption will be greatly boosted over time as activity restrictions are eased and levels of propensity to consume return to normal.
(Consumer price outlook)
In December 2020, the consumer price index (total excluding fresh foods, hereinafter referred to as core CPI) declined by 1% from the previous year for the first time in 10 years and 3 months, but the rate of decline narrowed to 0.1% in March 2021, due mainly to the suspension of "Go To Travel" and a smaller decline in energy prices. The CPI (excluding fresh foods and energy) has been rising for three months in a row, and the price trend has not weakened despite the sharp decline in economic activity. This is probably because the increase in stay-at-home demand has led to steady consumption of goods such as food, daily necessities, and home appliances and, unlike during normal economic recession, reduced the demand for services such as restaurants, which are not expected to be stimulated by price cuts. 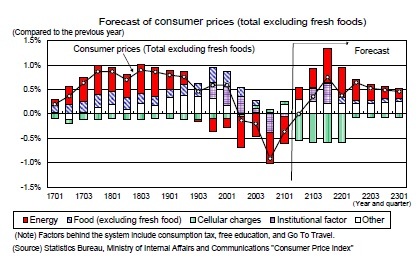 From April, the core CPI growth rate will drop by a little more than 0.5% due to drastic reductions in mobile phone charges. However, energy prices will increase in April due to a sharp rise in crude oil prices, and the pace of increase is expected to accelerate thereafter. As a result, the core CPI growth rate, after turning positive in the July-September quarter of 2021, is expected to rise to the high 0% level toward the end of the year, partly because of the large drop in accommodation charges caused by the "Go To Travel" suspension in the previous year. However, the underlying trend of prices cannot be expected to rise significantly because downward pressure from the supply-demand side remains, and the decline in wages is also a factor in lowering service prices. 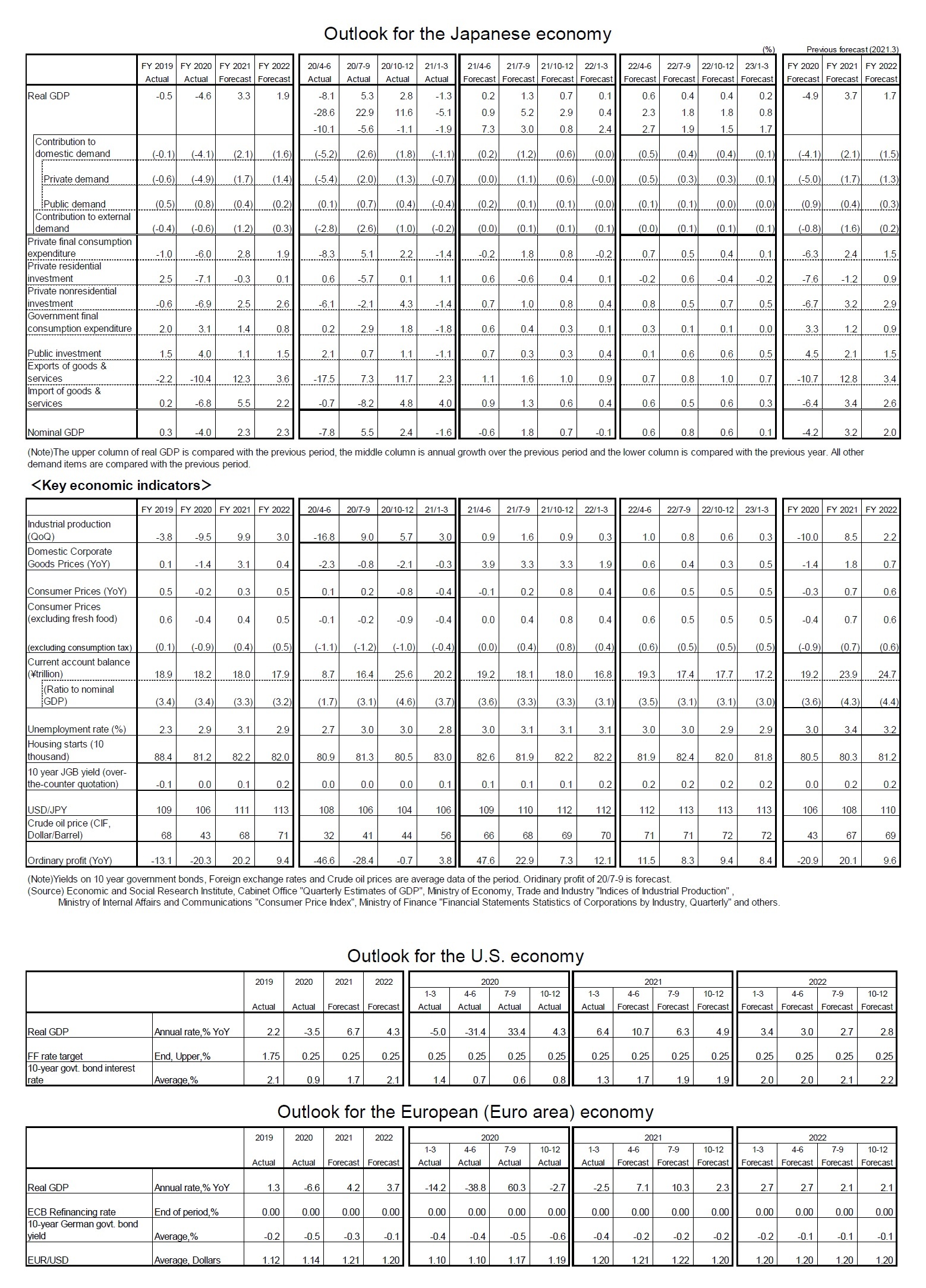 Please note: The data contained in this report has been obtained and processed from various sources, and its accuracy or safety cannot be guaranteed. The purpose of this publication is to provide information, and the opinions and forecasts contained herein do not solicit the conclusion or termination of any contract.