Surveys on the damage, living environment and reconstruction under the Great East Japan Earthquake have been conducted via a research project called the "International comparison of reconstruction of living infrastructure from disasters" (Yasuyuki Sawada, Professor, Graduate School of Economics, The University of Tokyo; Keiko Iwasaki, Researcher, NLI Research Institute) of the University of Tokyo since 2013. The surveys target all household heads of Futaba in Fukushima prefecture, where all residents were forced to evacuate due to the nuclear power plant accident caused by the Great East Japan Earthquake that occurred in 2011. Surveys were conducted in July 2013, December 2014, July 2016, December 2017 and July 2019. This paper reports the summary of results of the third survey conducted in July 2016.1

The survey includes questions about basic attributes such as age and gender, as well as questions related to connections with others (social capital) and health conditions (see the appendix at the end of this report for all the questions included in the survey). The questionnaires were distributed to all households of Futaba (about 2,900 households) that receive the regular town mail from Futaba. We received responses from 499 Futaba residents who had evacuated nationwide (the response rate was about 17%).

1 This research was supported by the following research grants.
Grant-in-Aid for Scientific Research (15 J09313, 26220502, LZ003), Research Grants of the Japan Center for Economic Research.
This study is approved by the Ethics Committee of the University of Tokyo (19 -73).

As for mental health, the distribution of K6 score, a clinically validated index for diagnosing the overall stress state, shown in Figure 4 indicates that K6 scores of Futaba residents are much higher compared to those for Japan. (K6 is an internationally used measurement for general mental health status that consists of six questions. The higher the total score, the more likely the respondent is stressed.)

K6 score distributions have been reported in disaster affected areas other than Futaba by the Government and local governments as well. As shown in Figure 5, K6 scores of Futaba residents tend to be higher than those of residents in other disaster affected areas, such as Wakabayashi area of Sendai and Ogatsu and Ojika area of Ishinomaki where the damages caused by the tsunami were tremendous. We believe that manmade disaster could have more serious and longterm impacts on victims’ mental health status because of their unique characteristics including uncertainty of the future. Furthermore, while subjective health status shows recovery trend after 5 years from the disaster, the K6 score distribution hardly shows the recovery trend, indicating that the mental health recovery of Futaba may take a very long time.

However, the results of this survey do not necessarily apply to all residents of Futaba, and a high K6 score does not necessarily mean that one has a mental disorder. Please note that the purpose of our survey is to provide policy implications to the Government or other administrative agencies.

Social capital refers to trusting relationships and networks, and is sometimes referred to as "kizuna" in Japanese. Social capital is getting attention as a key notion to achieve successful disaster recovery and has been one of the major focuses of our study. In previous studies, we showed social capital would play an important role in maintaining mental health after the disaster, while it might have been weakened by the disaster among Futaba residents.

There are several indicators that are commonly used to measure social capital, but we focused on three items which are the level of "generalized trust", "frequency of mutual assistance with neighbors" and "trust in neighbors". As shown in Figure 7 to 9, all of these three indicators show that social capital has weakened because of the disaster and recovery trends cannot be observed so far. Moreover, “generalized trust” shows a gradual declining trend can be observed during the three years period. These trends indicate that it will take a very long time for social capital to recover, and we believe it is important to continue to monitor these changes over the long term. 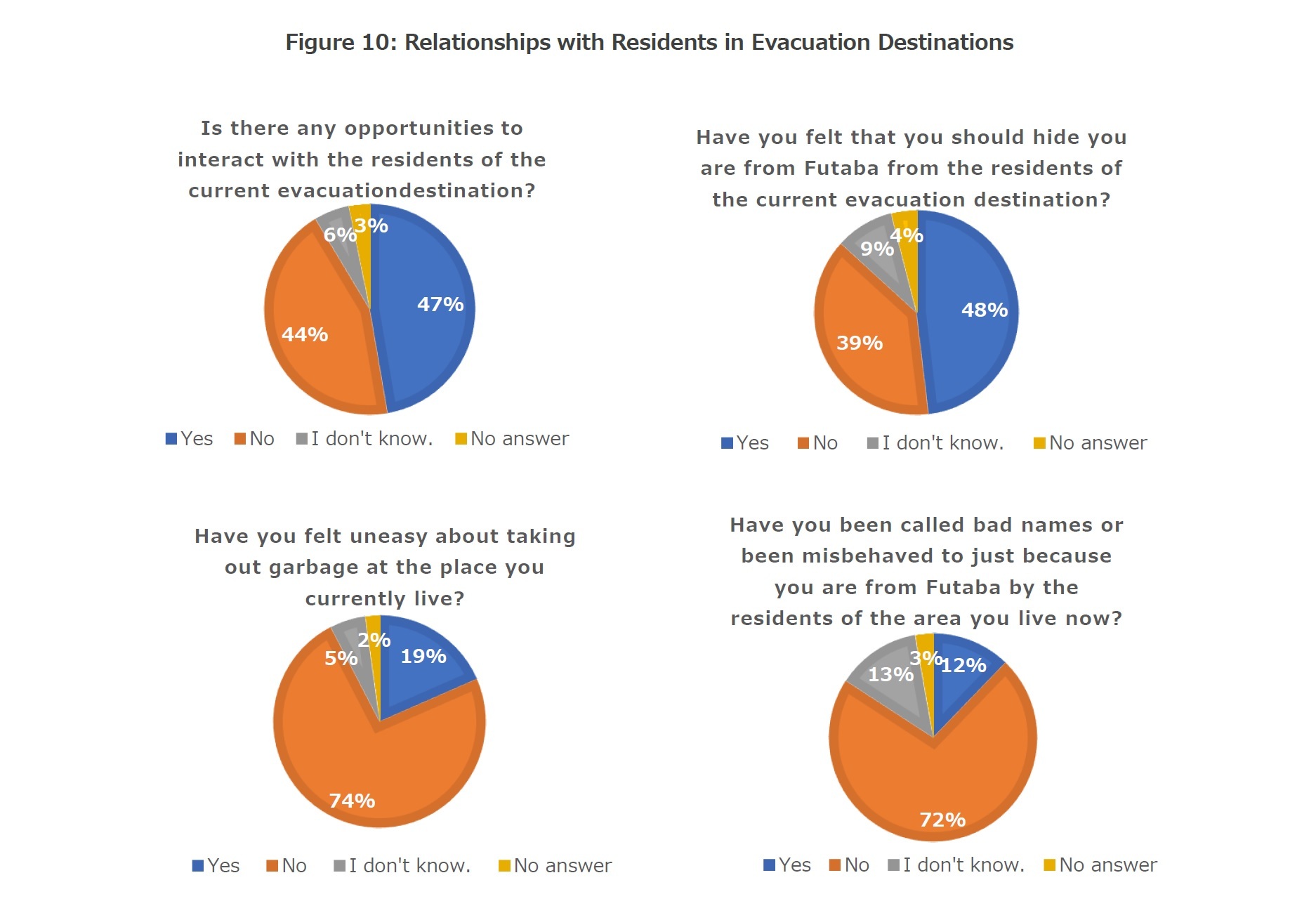 Furthermore, we found that those who do not have any opportunities to interact with the residents of the current evacuation destinations, those who have felt uneasy about taking out garbage, and those who have been called bad names or been misbehaved because they are from Futaba tend to have high K6 score (high stress). This implies the importance of the receptive attitudes of residents in the evacuation destinations and successful relationship buildings between evacuees and residents in the evacuation destinations to help mental health recovery of the evacuees. In addition, we have conducted an analysis comparing mental health status of evacuees who live in Fukushima and those who live outside of Fukushima, but have not found large difference so far.


5――Summary of Findings from the Three Rounds of Surveys

5――Summary of Findings from the Three Rounds of Surveys

(1) Futaba residents could be under more serious psychological distress than those in other disaster affected areas. More than five years have passed since the Great East Japan Earthquake, and their mental health status has hardly recovered.

(2) The disaster has weakened the social capital of Futaba residents, and recovery may take a very long time.

(3) Keeping in touch with friends from pre-disaster times as well as participating in hobbies and volunteer activities after the disaster may help people maintain good mental health.

(4) As to changes in income, health status, and living space caused by the disaster, we find that the greater the extent of decrease or deterioration is, the greater the degree of decline in individual well-being tends to be.

Our survey results are based on aggregates and analyses of responses from approximately 17% of the households of Futaba and do not represent all Futaba residents. Since the survey was conducted after a major disaster, the characteristics of respondents may be very different from general surveys and there is a possibility of an overestimation in our results due to the deterioration of physical and mental health conditions. Therefore, special caution is required in interpreting the results, and any definitive judgments based solely on these findings should be avoided.