2) Residential Rental
Tokyo residential rents have been on a rising trend, though at a slower pace, since 2014. Contrary to family and compact type residential rents increasing at a milder pace, single type rents which had underperformed before have recently accelerated rising (Chart-16).
Rents are on the increase in central Tokyo, especially in Chiyoda and Chuo wards, though those in Shibuya and Shinjuku wards have been struggling to grow (Chart-17).
Regarding the Tokyo luxury residential rents in Minato, Setagaya and Shibuya wards, rents in Shibuya ward declined continuously after corrections in all three wards in the second quarter (Chart-18). Though the number of foreign residents in Tokyo increased for the third consecutive year in 2014 and is still increasing this year with 440k in October increasing from 417k and 433k in January and July respectively, increasing global business risks can have an effect on the luxury residential market. 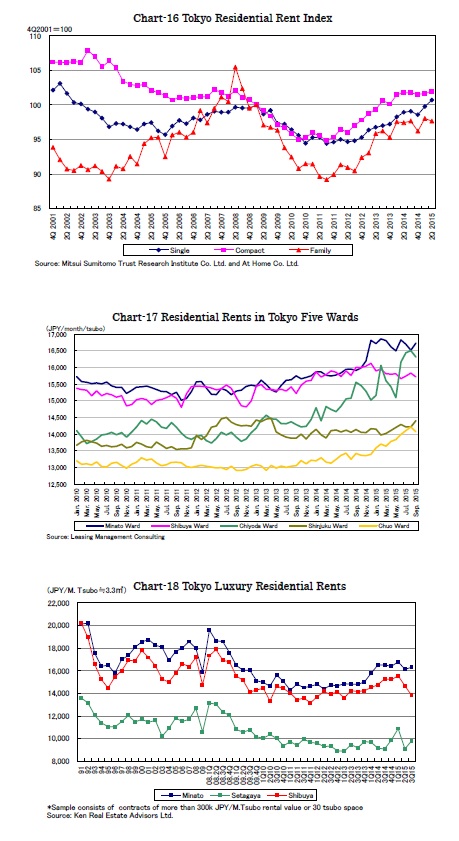 3) Retail, Hotel and Logistics
Despite retail store rents having shown some corrections (Chart-19), retail sales have been stable. The retail sales index by MLIT grew by 0.7% m-o-m to 104.6, posting the fifth consecutive month of positive growth, though some weakness has been noticed on automobiles, durable goods like air-conditioners and fuel products.
Same store sales of department stores and convenience stores grew for the sixth consecutive month posting a 1.8% and 1.3% y-o-y growth, respectively, in September (Chart-20).
Department stores are especially benefiting from significant growth of duty free sales targeting foreigners. According to the Japan department store association, the number of foreign customers grew by 131.8% y-o-y and sales to foreign customers grew by 80% in September posting the thirty-second consecutive month of positive y-o-y growth. 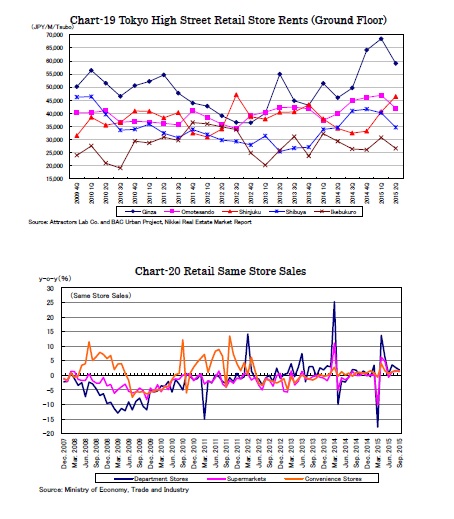 Foreign visitor arrival numbers have accelerated increasing this year despite strong numbers in 2014, with a 46.7% y-o-y increase in September (Chart-21). The year to date number marked 14.48 million in September, which has already surpassed the total year number of 13.41 million in 2014. In particular, the number of Chinese visitors almost doubled, increasing by +99.6% in September. Considering active Chinese visitors during their long holiday season, the number in October should also be sizable. 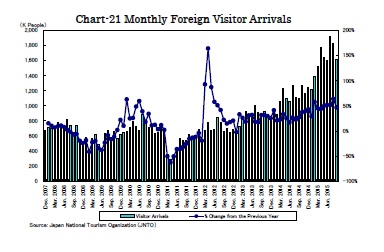