Japanese economic recovery has not been obvious from the negative q-o-q GDP growth in the second quarter on the back of uncertain Chinese business conditions. Although earnings results have been strong so far, corporations have not actively invested in equipment, which resulted in the sixth consecutive month of national trade deficit in September. Real consumption expenditure also shrank again by 0.4% y-o-y in September after a temporal 2.9% y-o-y rebound in August.
In the BOJ Tankan Survey in the third quarter of 2015, the current business confidence D.I. of large non-manufacturers and property industry companies improved from 23 to 25 and from 35 to 38, respectively. However, the D.I. of large manufacturers deteriorated ahead of the others from 12 to 10, and all three categories are forecasted to deteriorate noticeably in the fourth quarter (Chart-1).
NLI Research Institute reduced its Japanese GDP growth forecast by 0.1% to +1.0% for 2015 and forecasts +1.8% for 2016, reflecting the weaker than expected recent economic conditions (Chart-2). 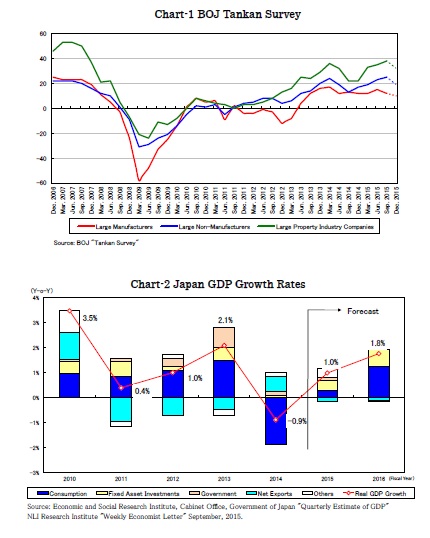 Housing starts posted a positive y-o-y growth for the fifth consecutive month to 77,872 units in September (Chart-3). Housing starts declined throughout 2014 suppressed by surging construction costs and the raised consumption tax rate. However, the construction cost increase has finally lost steam this year and housing starts have been recovering (Chart-4). Especially housing starts of apartments for lease have reached the peak volume that was seen in 2013 (Chart-5), reflecting the insistent demand by individual land owners to save on inheritance tax. 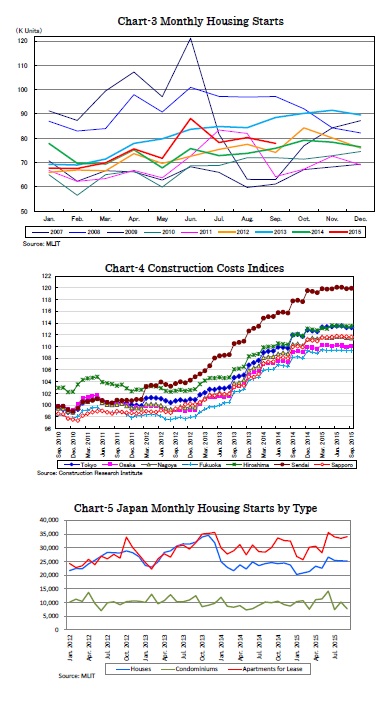 New condominium units sold in the Tokyo metropolitan area decreased by 27% y-o-y to 2,430 units in September following temporal increases in July and August (Chart-6). It looks like the pace of the rise in condominium prices overwhelms the growth in household income, and the sales number is struggling to grow.
Condominium prices in the secondary market continued to rise as Japan Real Estate Institute Home Price Indices in the Tokyo metropolitan area surged until August (Chart-7). According to Real Estate Information Network Systems, the average unit price in the secondary condominium market still rose in September by 3.6% y-o-y to 27 million JPY.
After being scarce due to high offering prices in 2014, the transaction volume of condominiums posted the fifth consecutive month of y-o-y growth in August, however, shrank again by 5.9% y-o-y in September (Chart-8). 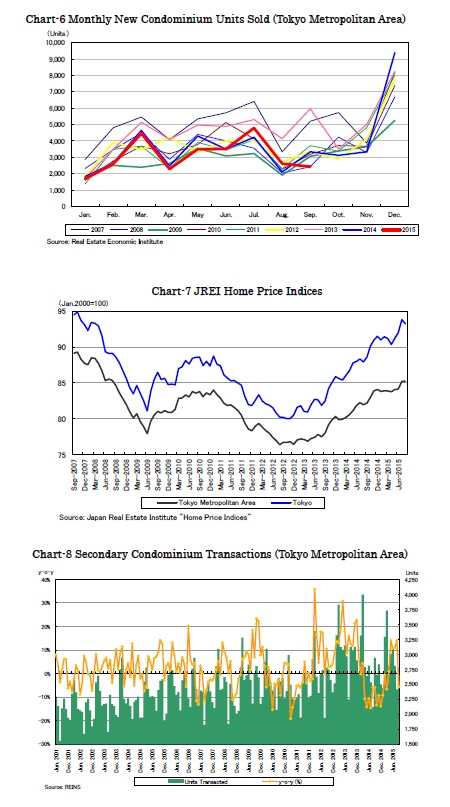